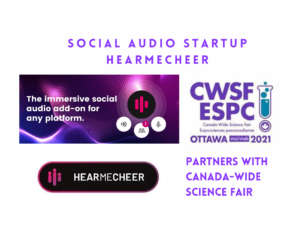 “It was an honor for HearMeCheer to partner with this year’s Canada-Wide Science Fair to bring our social audio tech to the students who participated in this year’s virtual event,” said Elias Andersen, the founder and Chief Executive Officer of HearMeCheer. “We were able to create an authentic, live and interactive audio connection for the students, from their homes to this amazing virtual event where students, parents and teachers from across Canada had access more than ever before to the programs, projects, exhibits and awards showcasing more than 400 finalists selected at regional STEM fairs across Canada.”

Andersen, the 21-year-old entrepreneur behind HearMeCheer, won a gold medal in the Canada-Wide Science Fair when he was in the eighth grade, and won three more medals over the next four years.

“Knowing that Elias was a Canada-Wide Science Fair alumnus, we wanted to build on that really cool connection with what he was doing with HearMeCheer, which we thought was pretty incredible,” said Julia McDevitt, Canada-Wide Science Fair Director with Youth Science Canada. “We built a custom virtual event platform for this year’s Canada-Wide Science Fair, but we wanted to do something new and exciting for our annual awards ceremony, which is where Elias and HearMeCheer came in. Our delegates around the country, as well as our awards finalists, were able to watch the event, but also participate through HearMeCheer, with private suites for each region where they could talk with each other. We were able to work with HearMeCheer to infuse that genuine audio throughout the platform, so that the award winners could hear people cheering for them in real time.

“People really enjoyed being able to talk with each other, even more than just hearing other people cheering,” McDevitt added. “HearMeCheer was amazing to work with, really collaborative, not just with our group, but the other three partners involved in creating this year’s virtual event platform. It was wonderful to work with an alumnus, in Elias, and give so many of our current delegates and this year’s award winners that unique experience.”

McDevitt noted that this year was supposed to be the 60th anniversary of the Canada-Wide Science Fair, but since the full event was not able to happen last year, 2021 became the 59th. For the first time, the event was held entirely virtually. Across the country, students from grades 7 to 12 competed in over 100 regional science fairs, and the winners of those attended the Canada-Wide Science Fair. Similar to a national sports tournament, this is Canada’s national science competition. The virtual event had 900 registered participants (550 over 7 days, 350 over 3 days), which included more than 250 judges and over 100 volunteers.

“It was challenging to create an energetic awards ceremony without an in-person audience,” said McDevitt. “Our emcee was live from a studio in Mississauga, where we incorporated our branding through lighting, visuals and music. The show was streamed live to the registered participants using Encore’s Chime Live platform, and to the public visitors on Facebook Live.  HearMeCheer’s technology allowed our participants to interact with one another and cheer on their peers during the ceremony, with that sound aggregated and fed through the production stream.”

In its second full year of operations, HearMeCheer is an innovative social audio engineering technology that enables deeper emotional connections to people, places and events from the comfort of home.  The company continues to evolve, now providing an immersive social audio “add-on” for any platform, as well as a compelling “Private Suites” capability to bring groups of friends together from anywhere in the world for a shared experience.

HearMeCheer has also grown beyond the company’s initial focus on live sports events to encompass all manner of live events, including concerts, comedy and entertainment shows.

“The current digital media solutions, such as Clubhouse or Greenroom, are missing the emotional benefits typically experienced when attending an event, or even when performing at an event,” Andersen noted.  “We feel the need for a shared experience with the crowd, social interaction with our friends, as well as the crowd to performer engagement that has yet to be created with the tech solutions that have supplemented live events since the beginning of the pandemic.

“When we took a look at the existing audio solutions out there, most of it is about the event broadcasting to the fans, without the interactions that would naturally happen between those people at that event,” said Andersen. “There’s a lot of positive stuff around crowds like the enjoyment and the value of an event, because other people are enjoying it like you are. That’s what’s currently missing when you use any kind of digital platform just to sort of watch an event.”

HearMeCheer uses a patent-pending technology to deliver audio processing on a scale never before seen in the audio industry. This allows HearMeCheer to provide an audio feed with up to thousands of people contributing at the same time, with live microphone input, all with only one audio stream coming in and out of each client’s computer.  The server also sends back customized streams for each client, with feedback cancellation applied for each client. HearMeCheer does this with WebRTC and the company’s patent-pending algorithms, running on extremely high performance compiled code. Not just another JS or Java application, HearMeCheer can be used as any audio add-on for any platform.

Another key feature of HearMeCheer is the “Private Suite”, in which a user can invite friends and family into the suite and chat with them, as opposed to a public room. HearMeCheer also features Twitter functionality, allowing two-way communication, as well as sponsorship opportunities within the application.

HearMeCheer was created at the beginning of the COVID-19 lockdowns on March 13, 2020.  Andersen was visiting Major League Baseball spring training camps in Arizona when the shutdown of sports and other events began. Before his four-hour return flight to Toronto landed, he’d formulated the rudiments of a business plan that was perfect during the most imperfect of times: HearMeCheer, an audio technology platform that let fans cheer during games from their cell phones, providing broadcasters and venues with authentic crowd noise for fan-less games.

HearMeCheer is an innovative social audio engineering technology that enables deeper emotional connections to people, places and events from the comfort of home. The Toronto-based company has created a patent-pending technology that can be embedded into other apps or platforms, allowing users at home to actively engage with their favorite performers, teams or events in venues around the world. Additional information is available at http://www.HearMeCheer.com