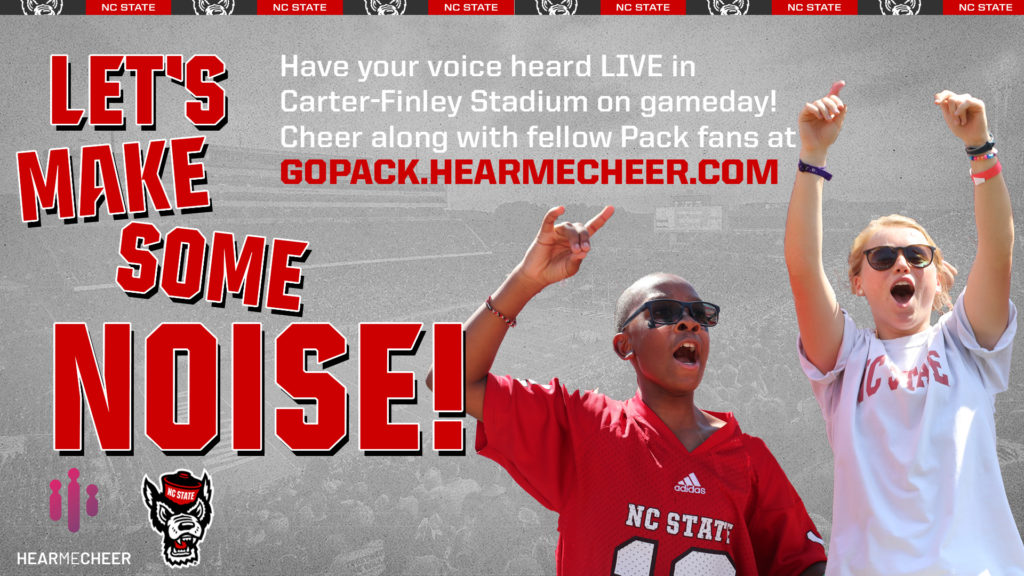 NC State’s game with the Seminoles this Saturday kicks-off at 7:30 p.m. Eastern time and will be broadcast live on the ACC Network.

“The NC State athletic department is pleased to partner with HearMeCheer and bring all of our students, alumni, friends and families into Carter-Finley Stadium this Saturday during Red and White Week, and for all our remaining 2020 home games, to create a truly fun and festive  atmosphere and home field advantage for our Wolfpack football team,” said Meghan Fitzgerald, NC State’s Assistant Athletic Director, Marketing. “While we are limited to the number of fans who can be here in person right now, we are thrilled to provide our students, alumni and fans a hub, with HearMeCheer, to have their voice heard during the game and around the world while in the comfort of their home.”

HearMeCheer allows fans who are watching from home to open their app and make their voices heard as a part of the piped-in crowd noise at Carter-Finley Stadium. Fans can join in on a “second screen” this Saturday at http://www.gopack.hearmecheer.com.

“Working with NC State on this project, bringing their fans together from the comfort of their own home into the Wolfpack’s Homecoming football game with Florida State, is a great opportunity for HearMeCheer, providing a higher platform for fan engagement,” said Elias Andersen, the founder and CEO of HearMeCheer. “HearMeCheer has proven, again and again, to be a successful fan engagement platform for a variety of teams, sports and events since we launched earlier this year. We look forward to bringing NC State students, alumni, families and fans all together now, not only this Saturday but also for their remaining home games this fall.”