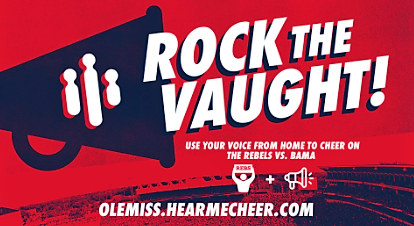 Oxford, Mississippi – October 5, 2020 – The Ole Miss Rebels return to Vaught-Hemingway Stadium for their second home game of the 2020 college football season this Saturday, October 10 against the University of Alabama Crimson Tide.

Normally a packed stadium would cheer on the Rebs, but with COVID-19 safeguards and precautions in place, the University of Mississippi has turned to HearMeCheer, the innovative and timely audio broadcast app that collects live fan noise and streams it into live sports television broadcasts,to bring the Ole Miss fans at home right into the action, in concert with limited number of fans and family members attending in person. Ole Miss is promoting the HearMeCheer app for use by their fans this Saturday on social media.

“We are thrilled to partner with HearMeCheer to bring the noise from our great fans at their homes right into our home in Vaught-Hemingway Stadium in Oxford for Saturday’s contest,” said Paris Buchanan, Assistant Athletics Director of Marketing & Fan Experience for Ole Miss Athletics. As Rebel fans from all over the globe watch the game from home with the web app open, HearMeCheer automatically sends microphone data to its server where they aggregate all of the sounds to create a single audio stream that is played in Vaught-Hemingway Stadium. Through their proprietary algorithms that correctly weigh each household and enable fans to yell loudly and not overpower the audio stream. “Even with the capacity limitations in place, our hope is that fans who can’t attend in-person will utilize this unique offering from the comfort of their own home to cheer on the Rebels and help us create a home-field advantage for our student-athletes.”

In addition to this Saturday’s contest, Ole Miss will utilize HearMeCheer again on Saturday, October 24th for the Homecoming contest against Auburn (game time to be determined).

The fall season continues to be busy for sports fans around the world, as live sports return to American television, while COVID-19 social distancing guidelines preclude most fans actually being in the stands in most states. HearMeCheer’s patented technology allows fans watching the games at home to cheer into the microphones in their smartphones, tablets and computers and be heard live inside stadiums, arenas, ballparks as well as on radio and television broadcasts from those sites.

Andersen and his growing company believe HearMeCheer is a software platform that can increase fan engagement. HearMeCheer takes audio from fans watching at home and aggregates the sounds into one audio stream, which is provided to broadcasters and to feeds in ballparks, stadiums, and arenas. The sound from fans is converted into crowd noise using low-latency algorithms.

Previously an Electrical Engineering major at the University of Toronto, the 20-year-old Andersen decided to leave college this past January to devote his full attention to his start-up. While pitching Major League Baseball teams the young company’s sports analytics platform at spring training sites in Arizona this past March accompanied by co-founder Jason Rubenstein, the pivot to develop HearMeCheer happened while Andersen was on an airplane returning to Toronto as the COVID-19 pandemic shut down the sports world.