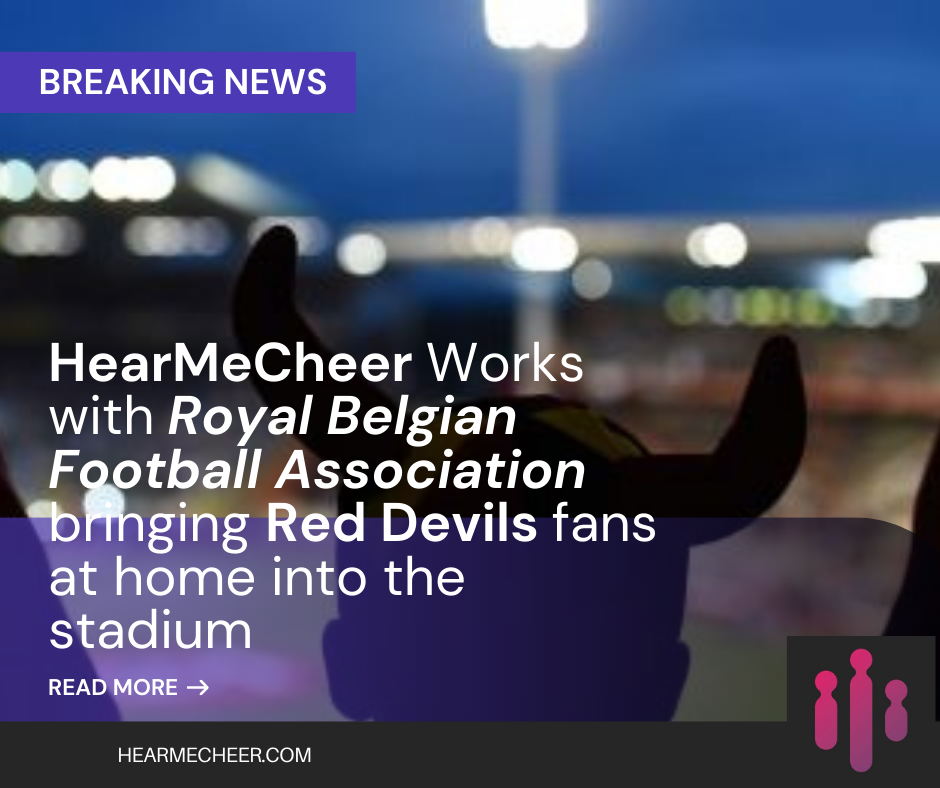 Toronto | Brussels – September 8, 2020 – Today at the King Baudouin Stadium in Brussels, Belgium, the Royal Belgian Football Association Red Devils will play against Iceland in an empty stadium. But to avoid it being a “silent” match, the Red Devils are calling on their fans to support them en masse, from their living rooms. RBFA has partnered with innovative start-ups HearMeCheer and FanFest to bring the full stadium experience to their loyal fans in their living rooms and beyond, as well as on the field for the Red Devils.

“The Devils will have to play in empty stadiums for some time, which is why we needed to find a manner in which we could engage our fans in the game and get the full stadium experience to them,” said Manu Leroy, Marketing & Communication Director for the Royal Belgian Football Association. “We found two innovative start-ups via the international virtual incubator HYPE Sports Innovation. HearMeCheer transmits live cheers, while FanFest allows supporters to chat with friends via their computers about the match as if they were in the stadium or a café. ”

HearMeCheer will bring the full King Baudouin Stadium experience on your TV instead of a sterile, pre-recorded audio track. The app from the Canadian start-up captures the cheers, chants, and encouragement of Belgian fans in front of their television. The app mixes supporters’ sounds and transmits them live as a background to the comments on Belgian broadcasters VTM and RTBF, the channels that will broadcast the match against Iceland.

“If you want to cheer the Red Devils on to victory from your living room, go to https://hln.hearmecheer.com/games/2020-nations-league-belgium  on Tuesday evening,” said Leroy.

“As a start-up, we are honored that we can help fans of the highest-ranking team in the world in one of the most popular sports,” said Elias Andersen, founder and CEO of HearMeCheer. “Now that the Red Devils have to play in empty stadiums in the time of COVID-19, our innovation helps the Royal Belgian Football Association create the feeling of a full stadium. It makes the experience much more enjoyable for the players on the field and the supporters at home in front of their TV set.

“HearMeCheer is built to bring together fans and teams in a new way, bringing the stadium experience into their home while bringing the fan experience into the stadiums so that the players know their fans are still with them,” Andersen added. “The opportunity for HearMeCheer to work together with the Royal Belgian Football Association gives everyone the chance to be part of this exciting match no matter where in the world they are watching, and lets the Red Devils hear their fans that inspire their on-field performance. The RBFA is actively engaging their fans in this COVID-19 world, as play resumes without fans in the stands. They are being proactive and innovative, and their willingness to work with a young startup company like ours is further proof that RBFA and other teams need fan engagement platforms like HearMeCheer to keep their fans in the game.”