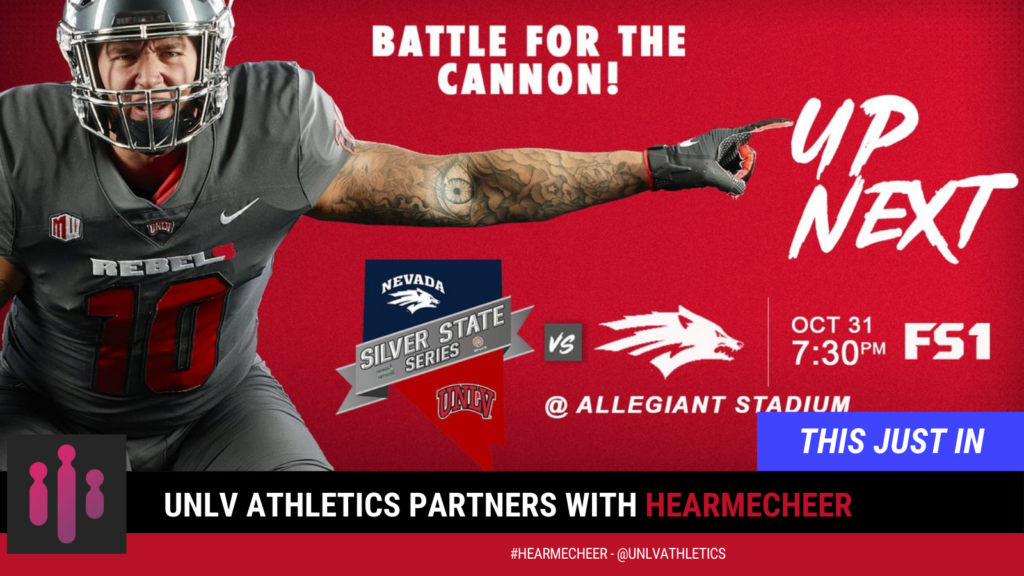 Las Vegas, Nevada  – October 28, 2020 – The University of Nevada-Las Vegas (UNLV) athletic department today announced a partnership with HearMeCheer, the innovative and timely audio broadcast app that collects live fan noise and streams it into live sports events and broadcasts, beginning with the Rebels’ first home game at the new Allegiant Stadium this Saturday, October 31st, and continuing through the fall.

The Rebels host in-state rival Nevada at Allegiant Stadium on Saturday in the annual battle for the Fremont Cannon, college football’s largest rivalry trophy. It will be the first game played before fans at the new stadium since the Raiders have decided to play their inaugural season in Vegas before empty seats amid the pandemic. Saturday’s contest will be televised nationally on FS1, with kickoff scheduled for 7:30 p.m. Pacific Time.

“UNLV Football is proud to partner with HearMeCheer and bring all of our students, alumni, friends and families into Allegiant Stadium this Saturday and for all our 2020 home games, to create a truly fun and festive  atmosphere and home field advantage for our Rebels,” said Karl Feek, UNLV’s Assistant Athletic Director for Marketing and Fan Development. “There is a great deal of enthusiasm for our games this season, and while we are limited to only 2,000 fans in person right now, we have had scores of students and alumni requesting tickets for this game, and we are thrilled to provide them with a hub for our fans at home to have their voice heard during the game and around the world.”

HearMeCheer allows fans who are watching from home to open their app and make their voices heard as a part of the piped-in crowd noise at Allegiant Stadium. Fans can join in on a “second screen” this Saturday at (website/extension).

“It’s great to be working with UNLV on this project, bringing their fans together from the comfort of their own home into the Rebels debut season at the amazing Allegiant Stadium,” said Elias Andersen, the founder and CEO of HearMeCheer. “HearMeCheer has proven to be a successful fan engagement platform for teams since we launched earlier this year. We look forward to bringing UNLV Rebels students,  alumni, families and fans all together now, not only this Saturday but also their three other home games this fall in November and December.”